The Sai was originally an iron weapon, based on an agricultural tool. They were probably carried in threes, the spare tucked into the back of the belt.

With practice, sai can be turned in the hand and held in a variety of ways, and used for strong blocks, punches and twirling strikes. Being of metal, they would have been effective even against a samurai sword, when the blade could have been trapped between the prongs of the sai. Sai could also be thrown at an attacker from a distance.

There are several sai kata that can be learnt and practised at Kazoku. Twisting the weapon in the hands smoothly takes a great deal of practice, and the moves of the various kata are complex. It is not enough to merely learn the moves, students must understand the application of the weapon if the kata are to be performed accurately. 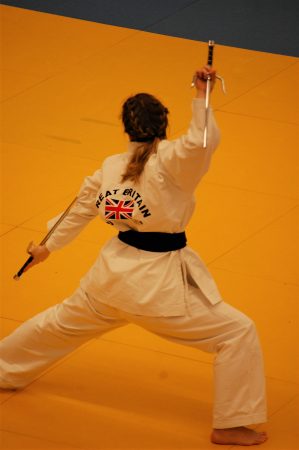