What is Kuzushi, and how does it work? 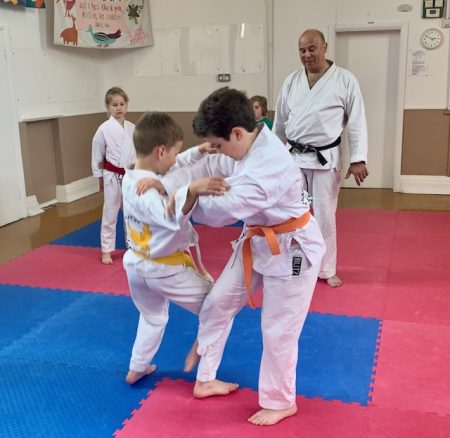 Japanese grappling arts such as judo and ju-jitsu often refer to kuzushi, the act of breaking or destabilising a person’s balance, as being vital to the execution of effective throws and takedowns.

While it is possible to throw a compliant, static partner who is on-balance, as soon as the partner starts to resist against throws, it becomes extremely difficult to throw them without resorting to brute strength, which may fail, or increase the chance of injury to the thrower. Instead, it is always preferable to introduce dynamic movement and attempt to disrupt uke’s balance at the critical moment just before the throw.

Many of ju-jitsu’s trips and sweeps (ashi waza) such as the advancing foot sweep (de ashi barai) work by trapping or moving uke’s foot at the moment their balance is broken, resulting in their base of support being removed, so that a fall ensues.

In ju-jitsu, we might achieve the same effect by using a swan block to draw uke off-balance by redirecting the energy of their punch, or by striking their upper body forcefully in the desired direction as we enter for the throw, using our arms. Gaining kuzushi in a backwards direction could be achieved by a forceful forearm strike/clothesline across the throat or upper chest, for example.

Traditionally there are eight directions in which balance can be broken, corresponding to the points of the compass around the body. Most throws work by off-balancing uke forwards (e.g. most variations of the hip throw), or backwards (such as the outside hock – o soto gari) but it is possible to break balance in any direction, often via a fast, sharp tug with the arms and/or rotation of the body.

Kuzushi is not the throw itself, it does not on its own cause uke to fall to the floor, as without a follow-up technique, balance will be quickly regained in most cases. However, balance-breaking is a necessary enabler and precursor that will greatly increase the likelihood of a throw working against a partner who does not want to be thrown. To master this principle it is essential to do as much sparring as possible against a moving and resisting partner. Randori (free sparring practice) is ideal for developing this skill and is an important part of judo and ju-jitsu practice.